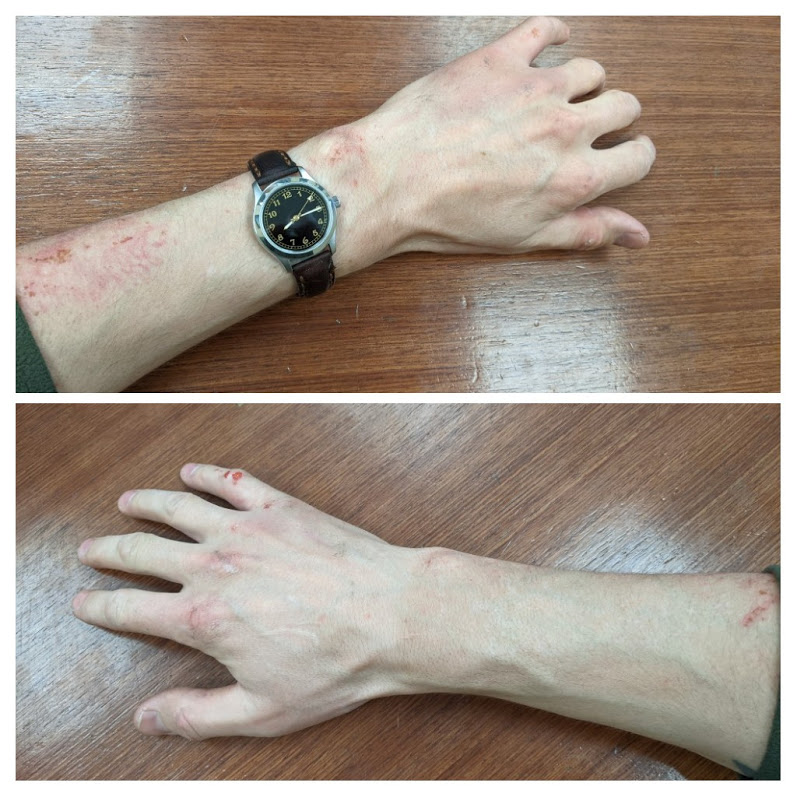 Yeah, that’s right. I said it. Handguards are overrated. HIGHLY. I’m even saying this as someone who spent the weekend racing an enduro event resulting in their hands looking like….well, look at the featured image of this post. 40 miles of racing tight singletrack and only a brief portion of that I just kinda thought I could go for having some full wrap handguards.

My claim of handguards are for suckers is mild hyperbole here. The sucker part is that so many folks think a couple fallacies about them. One, folks think that the handguards (brushguards, barkbusters, whatevers) are meant to protect your levers. WRONG. They’re designed to protect your danged hands. The other main sticking point is that people seem to think that if your bike doesn’t have them, then somehow you magically can’t ride offroad.

First, stop pointing the handguards down at a 45° angle seemingly inline with your levers. You are defeating the purpose of the silly things. You want handguards to be inline with your hands when you’re riding. When you’re installing them, look at the bike from the front. You want the beefy part of the things inline with your hands. It’s not gonna be perfect cause you’re dealing with assorted bar bends, and handguard shapes, but the idea remains. Yes, there is the added bonus that they MIGHT help protect your levers, but they’re not intended for that. KEEP THEM PROTECTING YOUR HANDS FOOL!

The other kicker is the folks who seem to think that to ride any sort of off-road you MUST have these jalopies strapped to your wunderenduro. It’s just not the case. Yes, I freely admit there are points where they can be helpful, however its NOT a necessity. Some may say I’m a glutton for punishment. I get it, I race a 4T in the woods…spooky, I know. However it’s not a bad idea for you to learn to ride through some trees without being dressed up like you’re training attack dogs. Knowing that your hands have some vulnerability will help force you to actually think about line choice and how to work through trees. If you want some form of advanced warning, then run some simple flag handguards like I usually tend to do (and did at this past race).

I’m sure if you’re reading this you might be wondering what this guys all butthurt about with these full wrap handguards. It’s simple. Full wraps have a few flaws that seemingly get disregarded. One, hands can be wider than the grips. What happens then if you (like me) move a lot on your grips, the aluminum full wrap at the end of the bars just destroys your hands. Tape all you want, but it won’t completely eliminate this. The other kicker is that full wraps can amplify the vibrations of a bike. One of the main purposes of 1-1/8″ “fat” bars was to allow rigid in the middle where they mount to the triple clamps, but allow movement\flex where you grip. Well when you bolt on these rigid aluminum clamps and what have you, you lose all this flex. I guarantee you’ll notice a difference. Ride them back to back with and without. This added vibration can cause fatigue as well as other issues.

There are some companies selling some things that are more or less a middle ground. Acerbis has some plastic full wraps which will allow flex, and I see there’s some that use a steel cable mounting system to allow some movement. For folks running them big dolla flex bars, there’s some that move WITH these assemblies. There are lots of options out there. All I’m trying to say is don’t be a fool. You DON’T need the things to ride in the trees. I’ve had as many whiskey throttle situations due to racing with full wraps as I have without them. I’ve broken just as many levers with them as without. Riding in the woods is a crapshoot. Run what yah like, but give it a try and don’t just buy into whatever hype some fool on the internet is telling you.

One thought on “Fool Wraps – Handguards are for suckers”