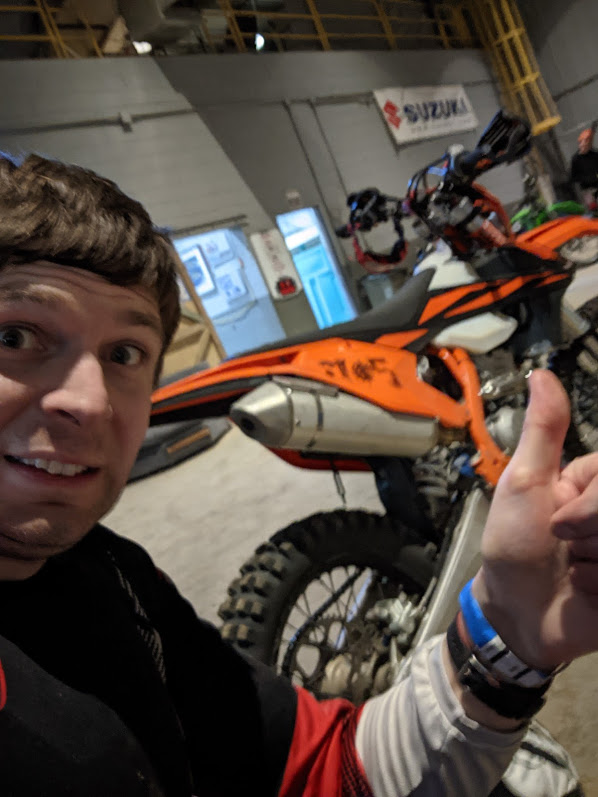 I’ve been asked in the past what I think about while I’m riding my bike. I had to think about that one a bit. In that deep thought and ponderance, I’ve come to the conclusion that all that is going through my head is “How do I get more grip”. I don’t have thoughts of crashing, or what’ll happen if I do this, or what happens if I do that. All I’m trying to focus on is if the bike is hooking up and going forward.

I know this is a very simplistic approach, but its something that I think could be used more of. I know I’m also likely ignoring some muscle memory that I’ve got in me from having ridden moto’s since a young age, but I think the principle remains. All you should be thinking about while riding the bike is if you’re gripping and moving forward. If you’re not feeling and listening to how the bike is reacting to your inputs, you’re behind the ball. If your mind is on other things, again, you’re behind the ball.

You need to be one with the bike. Listening to what its doing beneath you. How can you move, how can you act for what’s coming up in front of you and be ready for a turn, obstacle, or whatever. Are your hands, body, legs, etc all in a prepared state while your riding? Are you always at the ready for what the bike is doing? I’ve had my fair share of mental lapses while on the bike and I can tell you exactly where they put me…..in the dirt. I wasn’t allowing myself to be ONE with the bike.

This is a lot easier to practice and understand if you’re in a more defined setting (track\designated trail\etc), but is something that can be practiced ANY TIME you’re on a bike. Listen to the bike. This is another reason I’m a major advocate for wearing hearing protection while on the bike. The excess bike\wind noise (as well as other riders around you) are distracting you from being one with the bike.

So like Chevy Chase telling Donny to See the Ball…..Be the Ball…..Do the same on your bike. Listen to it. Feel what is happening. The more you listen to the bike, the more you’ll know EXACTLY what its going to respond with. If you want to spice it up, ride your bike in a situation that you HATE. Low grip situations, or sloppy scenarios will help you quickly know what your bike will be doing. The bike will tell you right quick if you’ve given a bit too much throttle, or a smidge too much brakes. The slop will accentuate those inputs, but the best part is that when you’re in a more normal scenario, you’ll find you can push those envelopes further than you could before.